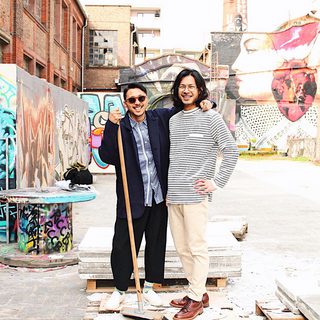 N STORE – for Europe from Japan

Whether in film, sports, culture or culinary delights, the Japanese community in Frankfurt is highly active.  Around 4,500 Japanese live in the federal state of Hessen—more than 2,000 of them live in the city of Frankfurt.

Large Japanese companies such as Nintendo, Honda and—who would have guessed YKK,  the world’s largest manufacturer of zippers—are based here too. However, the “N store” company philosophy has nothing in common with mass production and large corporations.

In its concept store, Yoshihiro Horikawa exclusively offers high-quality, sustainable, and handmade Japanese products. N store is a mobile Japanese boutique that Yoshi is constantly setting up in new locations as a pop-up. He reorganizes the pop-up store again and again, depending on the occasion, sometimes at Nippon Connection, in the ekin Footwear Shop, in a Sake Bar with a tea ceremony, or even at the AirBag Craftworks outlet in Kleestadt.  N store has secured itself on the internet as an online store, its warehouse and office are located in Frankfurt. “If you want to do something creative, Frankfurt is the place to be,” says Yoshi. “There are great local networks and the people are very helpful.” He is especially looking forward to Fashion Week 2021 in Frankfurt because that means new, fresh air for the local fashion scene.

How it all began

Yoshi came to Germany in 2010 from Nagoya, a port city in Aichi Prefecture located about 125 miles southwest of Tokyo. He started an apprenticeship at Azita—simply the most casual and coolest store and showroom for fashion, skateboarding and art in downtown Frankfurt. There Yoshi deepened his sense of good design, his knowledge of German and above all the idea of his own concept store. He chooses the range in the N store carefully, quality and fairness are the most important things to him, and the motto is “goodbye, mass production”. This includes hip, sustainable fashion brands such as Yashiki and Sayatomo, hip camouflage socks by Ayamé, Kasuri scarves made of the finest Japanese linen, Japanese fashion magazines, as well as the most beautiful ceramics from small manufacturers. He also sells traditional Daruma figures, which bring happiness to every household because he wants to be a distribution channel for Japanese handicrafts in particular. After exactly one decade in Germany, Yoshi says that Frankfurt—in particular—has become his second home. When asked what he particularly likes here, he answers “Apfelwein!”—with no hesitation.