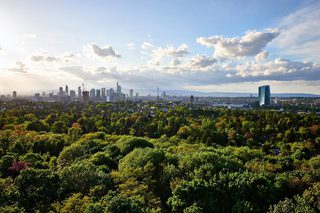 We all know the importance of our eco-footprint. Yet, it can be quite difficult to live environmentally friendly, especially in a city. In this regard, Frankfurt in Hessen is the most eco-friendly city to work in - second only to London and outperfomring other major financial centers such as Amsterdam, New York, Toronto and Singapore as a study by British Business Energy has now revealed.

With more than 20 per cent of Frankfurt’s surface area being covered by trees, the city secured a top position in this category. Widely known as the „green lung“, the largest inner city forest in Germany can be found here. It covers almost 6,000 hectares in total, with a majority of 3,866 hectares within the inner city itself. No wonder, more than 30 per cent of the commuters walk or cycle to work in „the city of short distances“ giving Frankfurt a place on the podium in this category as well. And good to know: During lunch break and after work, you can choose between almost 300 vegan and vegetarian restaurants.

Regarding the percentage of technology patents that were environment related in the different countries, Frankfurt ranks first. Just over eleven per cent of all registered new inventions in Germany were for eco-tech – more than anywhere else in the world. Additionally, around 46 per cent of our country‘s energy comes from renewable sources with targets set to have all of our energy requirements met renewables by 2050. Thus it looks as if Frankfurt will remain the perfect choice for eco-conscious workers, also in the long run.