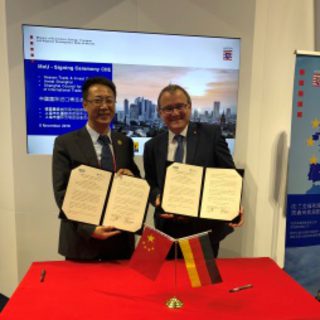 A delegation from Hessen led by Hessen Trade & Invest GmbH (HTAI) and the Hessen state ministry of economics is currently attending the China International Import Expo (CIIE) in Shanghai. This is the first time the CIIE has been held, and the event is already a superlative one, having drawn more than 400,000 buyers and over 3,500 companies from 172 countries to Shanghai. Sales are expected to be in the billions. Germany is a partner country for the fair, with 170 German companies participating in the CIIE, where they are forging particular connections with state buyers from Chinese provinces, industry associations, and consumers.

Dr. Rainer Waldschmidt, CEO of HTAI, pointed out in Shanghai: “With this new trade fair, China’s aim is to give exporting countries an opportunity to bring more products and services to China. We plan to work closely with successful regions in China and strengthen economic relations at a high level.” With this in mind, Waldschmidt signed three memoranda of understanding with important economic organizations in China.

Agreements were signed with SUN Xinhua, president of the Chinese business development organization Invest Shanghai, and Gu Chunting, vice-chair of the Shanghai Council for the Promotion of International Trade, with the goal of providing even greater support for economic ties and trade between Shanghai and the state of Hessen and facilitating the working relationship on a lasting basis. Representatives of the Zhejiang International Investment Promotion Center (ZIIPC) and HTAI also agreed that the two organizations would work together closely. Dr. Waldschmidt and ZIIPC president Lu We plan to provide targeted support to investors from each region as they set up shop in the other region, in part by arranging events and procedures that dovetail together.

“We welcome the further opening of the Chinese market to companies from Hessen. The CIIE is a prominent milestone in this process,” said Norbert Noisser, who is responsible for Asia within the Ministry of Economics, Energy, Transport and Regional Development of the State of Hessen. The province of Zhejiang, on China’s east coast, is leading the way in terms of reform and the opening of China. According to statistics provided by the trade ministry of the province of Zhejiang, there were nearly 62,000 foreign companies there in 2018. The rapid development of foreign trade and the international investment environment make Zhejiang highly interesting to companies from Hessen as well.

Waldschmidt, who is also the spokesman for the working group made up of the business development organizations of all of the German states, pointed out on the occasion of the signings that 2017 marked the second year in a row that the People’s Republic of China was Germany’s most important trading partner, with trade volume standing at 186.6 billion euros. In Hessen, China is second only to the United States, with trade volume at 14.8 billion euros. “One of the factors there is definitely that the Frankfurt airport and the Messe Frankfurt trade fair grounds are Germany’s gateway to China,” Dr. Waldschmidt said.

Noisser and Waldschmidt opened Hessen’s booth at the CIIE together. At the booth, they pointed out that since HTAI was founded, in 2013, a total of 755 international companies have already set up shop in Hessen or expanded their existing investments there – 155 of them from the PRC. That means over 700 companies from China have branches in Hessen. Says Waldschmidt, “It’s especially striking that a great many of the companies that have come to Hessen from China stick with Hessen in the long term, and that many of them also have plans for further expansion in the future.”

back
<
>
News / Hessen firms up economic ties with China