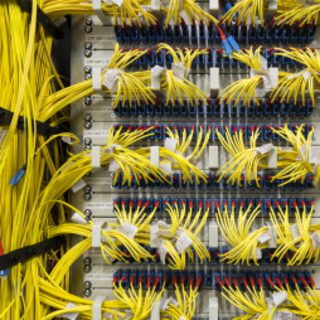 For the second time this year, DE-CIX (German Commercial Internet Exchange) in Frankfurt has hit a new world record.

Innovation is a deep-rooted tradition in Hessen: this is where the telephone was invented in 1861, and, less than 100 years later in 1949, Konrad Zuse founded Germany’s very first computer company in the town of Hünfeld. This year, a new data-based world record was set by Hessen.

For the second time this year, DE-CIX (German Commercial Internet Exchange) in Frankfurt has hit a new world record. On 12 December 2019, data throughput broke through another new barrier with more than 8.1 Terabits per second, increasing the record value of 7.1 Terabits per second from mid-September 2019 by almost one Terabit. Never before has so much data per second been exchanged at an Internet Exchange. With the new record, DE-CIX in Frankfurt, Hessen, remains in position No. 1 worldwide as the Internet Exchange with the largest amount of data exchanged. “This record figure not only underscores our position in the global market, but also that of the FrankfurtRhineMain metropolitan region as one of the most important data hubs in the world […],” says Thomas King, Chief Technology Officer (CTO) at DE-CIX.

Currently at DE-CIX Frankfurt, more than 930 ASNs are connected. With this many networks, DE-CIX Frankfurt not only is the No. 1 worldwide in regards to peak traffic, but also in regards of connected networks. Right in the heart of Europe, you can reach more Eastern European networks than at any other Internet Exchange in the world.

We would like to congratulate DE-CIX in Frankfurt for setting the new world record and we are looking forward to the record-breaking innovations from Hessen that await us in the future.

back
<
>
News / Hessen sets a new world record for data